We’re buried deep in January snow here, and the temperature is in the teens. My husband is getting ready to go to work, and I’m watching him as he pours his coffee and stirs in a spoonful of pepper jelly. . . .

That’s right. He doesn’t use cream or sugar any more in his coffee. He much prefers a spoonful of pepper jelly. It’s a good thing a spoonful is all he wants, too, because we’re really out of the product and he’s using a sharp knife to get pepper jelly out of the very corners of the bottom of the jar. I really have to remember to order some more pepper jelly today!

Ordinarily he spreads pepper jelly on his toast, too, but since he’s using the very scrapings of the very last jar, he had to make a difficult choice: his coffee or his toast. He chose his coffee. 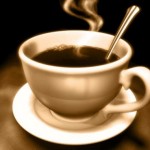 There’s none left for me, but since this is my day off and he has to go in to work, I let him have the pepper jelly.

A spoonful of Texas Pepper Jelly in a cup of hot coffee on a below-freezing morning in a house buried in snow. . . . it’s almost worth getting up early just to experience it.

After Tim finishes his coffee and leaves, I think I’ll go back to bed. It’s so early, it’s still pitch dark outside, and after all, this IS my day off.

I only wish I had some pepper jelly to stir into MY coffee. Sigh. What a good wife I am, to let my husband have the last of it. 🙂