Football season means awesome couch quarterback/tailgate/fall cookout food, and all of it is awesome!

For us, pulled pork is the staple food of football, and depending on the weather, we’ve made it in the crockpot, on an outdoor spit, in the oven, and on the stovetop. This weekend, we used both slow cooker and backyard grill.

We worked all day, so before we left on Friday morning, we put a huge pork loin in the crockpot, turned it on “low,” and went to work. Nine hours later, we took the loin out of the crockpot (it was so tender it fell apart!) and put it in the refrigerator.

Saturday morning, we fired up the grill and we got out our cast iron wok. We put the flaky-tender loin in the wok and pulled it apart. We added four large sliced onions and a bottle of Craig’s BBQ Sauce. (It’s the BBQ sauce that seals the deal with families!) We let the shredded pork sizzle and watched the flavors blend and our neighbor came to the fence to tell us that her family was insisting SHE make BBQ pork because the aroma was turning them all into drooling crazies. (Her words!)

Add to this feast of wonderful BBQ pulled pork was Texas Pepper Jelly’s own spicy baked beans, coleslaw, and 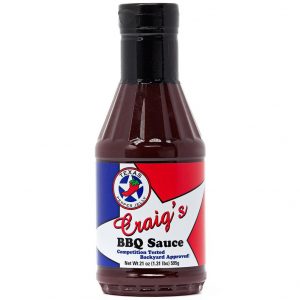 potato salad. (You can find recipes for them all right here on the Texas Pepper Jelly website!) We made enough of everything to feed a small nation for several days, but wasn’t really surprised when the crew cleaned up every bite in two nights.

Be sure you’ve got enough Craig’s BBQ Sauce on hand; people will want to add more to their sandwiches. We’ve learned that we can never have too much of it in the pantry because however much we have, they will use up.

The main dish for your football-watching crew will be the pulled pork, of course, which is why we buy a loin that weighs up to ten pounds. You won’t have too much – you’ll never have too much.

Sometimes we add shredded green and red peppers, but this year we just added lots and lots of fresh onions and the BBQ sauce and saved the peppers for the potato salad and slaw.

Whenever we add onions and peppers to a meal, we count it as a vegetable. Because, you know, they ARE vegetables.