Ghost Peppers & TPJ's New Sauce: Think You Can Handle It?

You’ve heard of ghost peppers, but do you know anything about them other than they are very hot? In celebration of our newest creation, Ghost Pepper Hot Sauce, we’ve decided to impart some wisdom to you about ghost peppers, including their history, because these guys are no walk in the park; only serious pepper lovers step forward. Let’s just jump right in.

What are ghost peppers? Where are they from?

The ghost pepper (officially a fruit) is a hybrid chili pepper, specifically Capsicum chinense and Capsicum frutescens. Its skin is wrinkled and pocked, with the shape slightly tapered. Ghost peppers only measure about 3 inches in length and belong to the nightshade family. The most common color of mature ghost peppers is red. However, other rare colors, including orange, yellow, and chocolate, exist. Originating in Northeast India, the ghost pepper is also known as bhut jolokia. The ghost pepper is one of the hottest on the planet.

How hot is hot?

Without getting too technical, the heat of chili peppers is calculated in Scoville Heat Units, or SHU, using the Scoville scale. So, how hot are ghost peppers? Let’s give you some perspective, here’s a look at some common peppers (the list is not exhaustive):

Believe it or not, the ghost is no longer the hottest pepper on the planet. That title currently belongs to the Carolina Reaper at 2,200,000 SHU. Now, that’s a hot pepper. 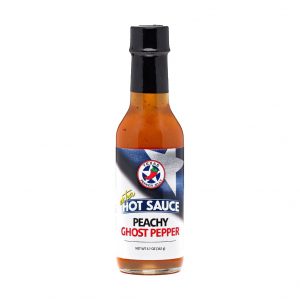 We know from your many requests that some of you enjoy the ghost pepper’s heat. For that reason, we did what any good southerner would do, bottle that stuff so you can douse whatever your heart desires. Mind you, when perfecting our new Texas Pepper Jelly Ghost Pepper Hot Sauce, we knew creating a sauce strictly made of ghost peppers wasn’t going to work; we needed to add a sweet element to balance out the heat so you could actually enjoy eating it. Our obvious pick was peaches. We can say they are truly a match made in heaven. Although we must warn you, while balanced, this hot sauce still brings some kick. Whether you’re brave enough to eat our new hot sauce straight up or mixed with, say, some Craig’s BBQ sauce, we hope to hear about your face-off with the legendary ghost pepper. Good luck! By the way, forget water, have milk on hand, as it neutralizes the heat (capsaicin) and will help you from breathing fire.