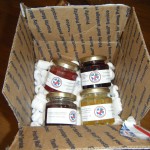 And, I was right!

They were with me when the box arrived, and we brought it into the house immediately, and they passed the jars around, commenting on how pretty the pepper jelly looked in the sunlight. “It’s more than just pretty,” I told them.

So, I got out a brick of cream cheese, cut it into four chunks (I was in a hurry to show off the Texas Pepper Jelly) and poured a little pepper jelly over each piece of cream cheese. I opened a box of Ritz crackers and some wheat thins, and we all jumped in.

We shared with her.

Four people literally licked that tray clean. My daughter hinted broadly that she would like to take home the opened jars, but this time I put my foot down and kept them.

I am serious when I tell you all that Texas Pepper Jelly is the best pepper jelly on the face of the earth. People from the Gulf Coast, who made their own, agreed: nothing they had ever made or bought in Mississippi held a candle to Texas Pepper Jelly.

Guess what we had for lunch when we returned from the airport today. . . . . peanut butter and pepper jelly sandwiches. And Fritos, which are pretty darn good dipped in Pepper Jelly, too.