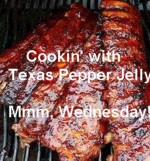 Apples and cinnamon smell so good that we even buy candles and potpourri to make our homes smell like that!  My house smells like apples and cinnamon right now, in fact, but I don’t have any candles burning.  What makes my home smell like heaven today is our dinner, simmering in the crockpot, covered with Texas Pepper Jelly’s absolutely fantastic, brand-new Apple Cinnamon Grilling and Finishing Sauce.

Apple Cinnamon Grilling and Finishing Sauce doesn’t have any peppers in it, but it doesn’t need them, for this is a different kind of product, and we’re going to be using it in two different ways at dinner tonight.  Firstly, could there BE a more wonderful combination than pork and apples and cinnamon?  If there is, I can’t think of it offhand.  I even cut up an apple and put it in the crockpot with the pork slices!  For dessert, we’ve got plain vanilla ice cream, but after we pour some Apple Cinnamon Grilling and Finishing sauce over it, it won’t be plain any more – it will be FANTASTIC!

How many products do you know of that are perfect for both the entree and the dessert?  With Texas Pepper Jelly’s 100% yummy and absolutely delicious Apple Cinnamon Grilling and Finishing Sauce, you’ve not only got something that completes the beginning AND the end of your meal; you’ve also got a house that smells like Eden.

I’ve got so many ideas flowing through my head right now – ways to use this scrumptious sauce – and I can’t WAIT to try them.  My husband can’t wait, either; when the aroma first started wafting through the house, he asked me why I was burning one of the expensive candles at that hour!  I told him it was dinner, and he lit up like a lighthouse.  I have a feeling that he won’t linger at work today.

You can buy Texas Pepper Jelly’s delicious and wonderful-smelling Apple Cinnamon Grilling and Finishing Sauce right here, and if I were you, I wouldn’t wait another second to do that.