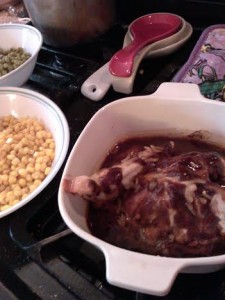 We had the yummiest dinner tonight! I took two frozen solid chicken breasts out of the freezer, put them in a small casserole dish, covered them with Craig’s BBQ Sauce and onion bits, covered the dish, and put it in a 350 degree oven for an hour and a half. (An hour if your chicken isn’t frozen.)

There is something about Craig’s BBQ Sauce that turns any and every kind of meat into a gourmet delight, but I think my children love it on chicken the best. My husband and I love it on pork almost as well, but tonight we had chicken. I say “had” because there’s not a trace of it leftover.

There’s a little corn and a handful of peas leftover. There’re even a couple of yeast rolls leftover. (We did eat all the baked potatoes.) 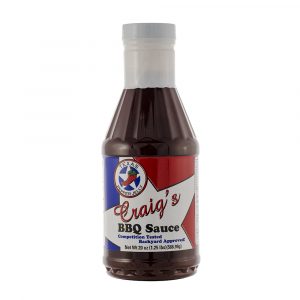 We are big barbecue sauce fans, but Craig’s BBQ Sauce out-performs every other kind I’ve ever tried and served. My husband and kids agree, and believe me, we don’t always have a 100% consensus on food. This time, however, everyone at the table agreed: best barbecue sauce EVER.

Craig’s BBQ Sauce is the most delicious bbq sauce you will ever have on your table. Hands-down, no other brand comes even close.

I may have emailed the picture of our dinner to the kids, who ate elsewhere tonight. I might have bragged about how good it was, and I seem to remember telling them that their fast food with friends was probably good, too.

I don’t think they fell for it. They were a little upset about that “no leftover bbq chicken” thing, too.

But honestly, when you use Craig’s BBQ Sauce on your chicken, no sane person would ever expect leftovers!