Not everybody has turkey for Thanksgiving dinner, you know. Some people prefer to bake a ham, instead of or along with that turkey.

Instead of brushing brown sugar over your ham before you put it in the oven, try glazing it with Texas Pepper Jelly’s Pineapple Habanero instead. Then toothpick your pineapple rings all over it, put it in 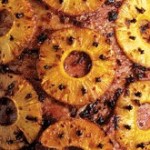 the oven, and let the pepper jelly work its magic on your ham.

The pepper jelly will caramelize and soak into the ham, flavoring it as a ham on your holiday table has never been flavored before. After this, though, we’re willing to bet that you’ll use our pineapple habanero pepper jelly every time you bake a ham.

Your family, friends, and guests will rave over your Texas-baked ham.