The weather outside today was bright and breezy. I didn’t want to fix a heavy complicated meal, so I thought I’d prepare one of my mainstays, which is also one of my children’s favorites, which they have, since childhood, called Sloppy Pepper Joes.

This is actually just regular sloppy joes, but with an assortment of peppers added to the meat. These added peppers make an incredible difference in what was a very ordinary dish. Add the peppers and it’s ordinary no more.

I go one step further, in fact. To the mixture of meat, onions, and peppers, I add some Craig’s BBQ Sauce instead of mere ketchup or tomato sauce.

My kids have told me many times that the first appearance of Sloppy Pepper Joes on the table is one of their signals that it’s really spring. I hadn’t noticed that I never served this in winter, but apparently I don’t. 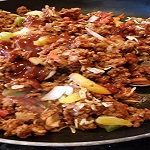 This is technically a sandwich, of course, but it’s also a meal. A meal on a bun. It’s a meal on a bun that’s easy to make and really nutritious as well.

Brown the ground beef in a large skillet; drain thoroughly. THOROUGHLY. Add all the other ingredients and mix completely. If you need more barbecue sauce, feel free to add more. I usually do.

Cover the skillet and simmer on the lowest heat your stove is capable of. Set your timer for fifteen minutes, but check every five minutes or so.

In the meantime, warm your buns (saying that always cracks me up!) in the microwave.

I always serve this dish with potato salad and baked beans. Flip through the Texas Pepper Jelly blog, and you’ll find awesome recipes for both of these side dishes!

Turn off the stove burner, and spoon the mixture into a serving bowl. Set it on the table with the sides, and call in your family. Stand back.

There will be no leftovers. But on the off chance that there is a little big leftover, add some sour cream and serve later that night with crackers.