Craig’s BBQ Sauce beats them all.

These cold winter days, there’s nothing like coming home to the aroma of a crockpot full of barbecued ribs, or chicken, and that aroma will be even better if Craig’s

I usually toss a few chicken breasts into the crockpot along with the pork ribs. They enhance each others’ flavors, and the barbecue sauce turns everything you put in there into a fine dining experience.

Put a lot of napkins on the table. Barbecue done right will be messy. That’s part of the fun, so don’t get fussy at the table, y’all hear me? I make my family put on old t-shirts to eat good barbecue so I don’t have to worry. I’d make my husband wear a big bib if I could get by with it – he’s messier than the kids when it comes to barbecue. 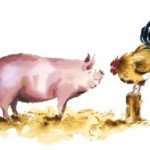 Crockpot barbecue is one of the easiest things to make, too. Just throw some ribs and chicken into your crockpot, dump a half cup of diced onion on top, and pour about half a bottle of Craig’s BBQ Sauce over it all. Put the lid on the cooker and set it to “low,” and go to work. Or go to bed; I often do this at night. Seriously, the aroma spreads through the entire house and gives everybody good dreams.

Whatever recipe you decide to use, if it’s barbecue sauce you need, it’s Craig’s BBQ Sauce you need to use. There’s simply none better. None. Zip. Zero.

This is the best barbecue sauce ever created.