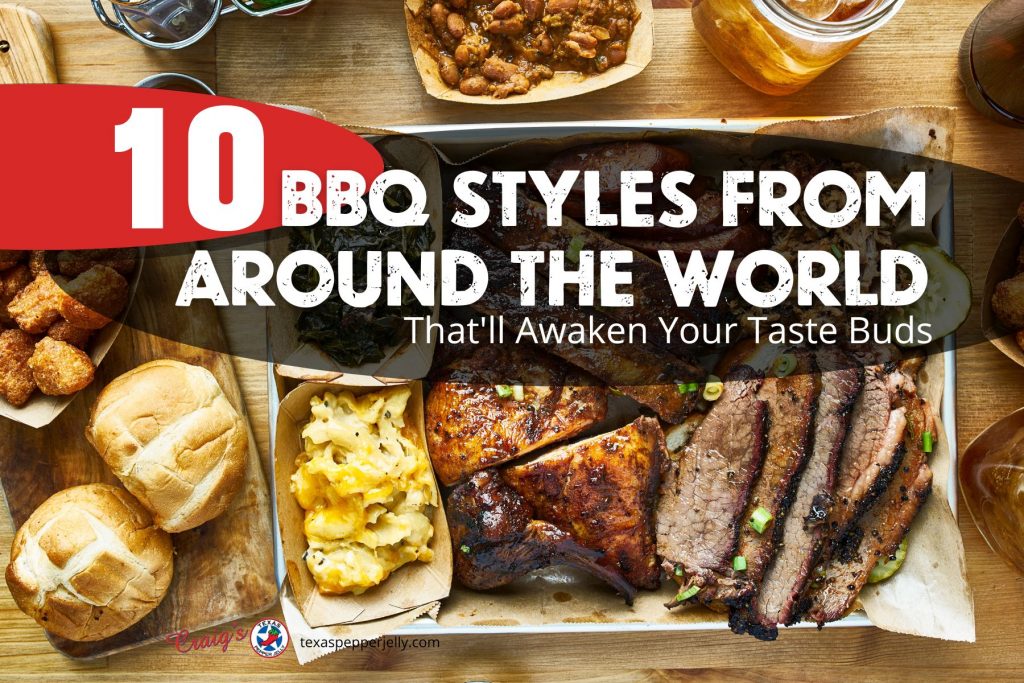 Are you feeling adventurous? Are you ready to go beyond your traditional barbecue sauce-laden pork, beef, or chicken barbeque cooked on your backyard gas or charcoal grill? Today’s your lucky day because we put together a list of BBQ styles from around the world to encourage you to branch out from your BBQ mainstays. You can thank us later.

Often thought of as the origin of the word barbecue, barbacoa is a Spanish name given to an indigenous Caribbean cooking style. After migrating to Mexico, barbacoa meant the cooking of a whole sheep wrapped in maguey leaves and slowly cooked over an open fire pit in Central Mexico. Other areas of Mexico, like the Yucatan Peninsula, use pork, whereas northern Mexico uses beef or goat head.

The traditional Hawaiian cooking method, Kālua, generally means anything cooked in an imu, an underground pit lined with hot lava rocks. This bbq style is often celebrated during a luau and usually features a whole pig stuffed with hot lava rocks, wrapped in banana leaves and covered with wet burlap and sand, then cooked for several hours.

Tandoori is an Indian method of cooking foods over a charcoal fire in a large clay oven called a tandoor. Usually set into the ground to hold heat, reaching about 500 degrees Fahrenheit. The most common marinade ingredient in Tandoori cooking is yogurt, followed by garam masala and other spices. A popular protein cooked in this style is Tandoori Chicken.

Braai (pronounced “bry”) is South Africa’s regional barbecue style. You can find this way of cooking across the country. It’s so popular there is a national Braai Day every September 24th. In South Africa, only males can practice the Braai cooking method, which is done exclusively with wood. Various meats, including chicken, pork, beef, and lamb, are prepared with multiple marinades and sauces, one of which is called monkeygland sauce. Don’t worry; the sauce often used as a marinade or chutney (served on the side) is merely a combination of garlic, ginger, ketchup, mustard, soy sauce, and onion.

Jerk cooking is the Jamaican style of barbecue. Meats, whether it be the most often used chicken, pork, beef, or goat, are coated with a marinade or paste made from allspice and scotch bonnet peppers (think habanero peppers). The meat slowly smokes over a fire or grill with pimento wood, which can take several hours.

The Mongolian style of barbecue is Khorkhog, a portable cooking method. Bone-in cuts of meat such as mutton, lamb, or goat, are layered into a large metal jug lined with vegetables (cabbage, potatoes, onions, and carrots) and hot stones. Unlike other cooking methods on our list that require a fire, Khorkhog requires you to pour water into the jug, causing steam. Lidded, the combination of the steam and hot stones cooks the meat into a dry stew that you can eat with your hands.

Chilean asado is the South American country’s barbecue style. You may find asado made with a quartered, halved, whole chicken, pig, goat, beef, or lamb. Unlike North American barbecue fans, Chileans skip the marinade and only salt the meat before hanging it on a pole or stick and cooking it over an open fire. Asado in Chile is typically served with a spicy green sauce called pebre. Ingredients include olive oil, diced onion, garlic, tomatoes, cilantro, and aji peppers.

Chuànr is a popular barbeque style of skewered street food in China. Vendors cook meats such as lamb, chicken, beef, pork, their internal organs, vegetables like eggplant and mushrooms, and other exotic flares, including silkworm cocoons, frogs, crayfish, and whole fish.

Yakitori is another street food barbecue style popular in Japan. Unlink Chuànr in China. Yakitori is skewered chicken cooked over charcoal. The most popular chicken parts include the thighs, wings, tail, neck, skin, and liver. Meat from under the breast is mixed with spices and formed into meatballs that are then skewered and cooked. Seasoning for the chicken is either salt or a sweet/savory sauce.

Lechón is a Filipino barbecue style that requires slow-roasting a whole pig on a spit over coals. The hog is often stuffed with fruit, lemongrass, leeks, garlic, and other spices, while soy sauce or coconut milk is rubbed on the skin. Although condiments and accompanying sauces aren’t necessary, a common Filipino pork liver sauce, Mang Tomas, is often served with lechón.

If you get a chance to experience one of these worldly barbecue styles, share with us via social media or email.