Craig’s BBQ Sauce for every kind of meat you might put on your grill!

October is here – it’s autumn at last! – but don’t think for one moment that autumn means the end of barbecue season. Barbecue season is year-long! It’s not even the end of outdoor cookout season yet!

The temperature here was in the high eighties, in fact. People are still loving to cook and eat outdoors in October!

While it’s true that every season is barbecue season, it’s also true that the vest of all possible barbecue sauces made on Planet Earth is Craig’s BBQ Sauce! There are some good bbq sauces out there, sure, but the best of them still can’t compete with Craig’s BBQ Sauce for perfection. 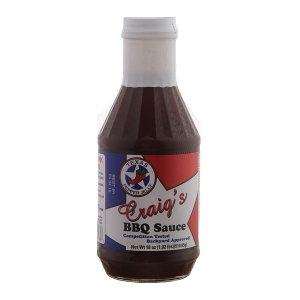 This is the best barbecue sauce you’ll ever taste.

Craig’s BBQ Sauce has a sweet southern barbecue taste that will tickle your taste buds and make your whole body laugh out loud with delight! Just a little bit of a kick, added to the smoothness and sweetness, combines to make Craig’s BBQ Sauce the best of the best!

Craig’s BBQ sauce is excellent with every kind of meat you’ll ever want to throw on your grill, too. Chicken, pork, beef, lamb. . . all meats are better with Craig’s BBQ Sauce brushed on the top. And the sides. And the bottoms, too. Oh, heck, put a cup of Craig’s BBQ Sauce on the table for dippin’ purposes, too. They’ll ask for it so you might as well beat ’em to the punch.

You can choose between a regular bottle of Craig’s BBQ Sauce or our giant gallon bottle. You might as well order the big one to save yourself some time later on down the road. They’ll want more. They’ll ask for more. You’d better have more!